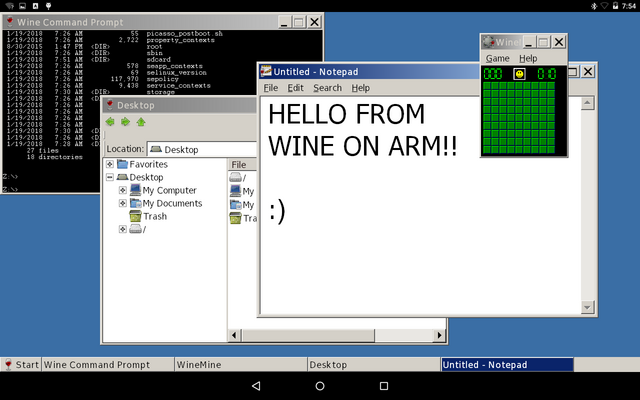 Yesterday marked the official release of Wine 3.0, bringing a multitude of bugfixes, support improvements, and long-awaited features. Among these is the initial release of the Android support drivers for the Wine platform. Naturally, when I heard the news I was excited to try it out! However, I was disappointed to find a complete and utter lack of documentation on building it for Android. This post is a collection of test notes and build steps to jump right into getting Wine running on your ARM/ARM64/x86 Android, as well as Wine on Android development for potential contributors.

Disclaimer: Wine on Android is still very much under development and may not work for all devices, architectures, and graphics drivers. Additionally, Wine Qemu integration for Android is not yet fully complete, meaning you will currently ONLY be able to run Win32 applications on x86 devices and WinRT applications on ARM devices. See https://forum.xda-developers.com/showthread.php?t=2092348 for a list of programs ported to WinRT.

In order to build Wine for Android, you’re going to need a few prerequisites:

Okay, so you made it this far. Congratulations!

This guide assumes that all building will take place in ~/wine-android, so go ahead and create that:

Next, grab a copy of Wine from http://winehq.org and extract it:

Now you should have a directory called wine-3.0 in ~/wine-android, go ahead and copy it (we’re going to need to build a native version of Wine first).

And build Wine for your host system. A guide on how to do this can be found here but basically the commands to build are as follows:

and you’re done! Building for the host first is necessary because we’ll need everything in the tools/ directory to cross-compile. cd back to the parent directory:

Now it’s time to get ready to cross-compile! Depending on what architecture you want, you’ll have to use a different toolchain. Some common ones have been listed:

This should hopefully complete without error and create the directory android-toolchain/. Export it to your $PATH:

Next, we’re going to need to download and build Freetype2 for Android. Freetype is necessary to render fonts in Wine. Download and extract Freetype using the following commands:

Now cd into the newly-created directory to begin cross-compiling Freetype.

Now that you’re in the source tree of Freetype, run the configure script like so:

After that’s complete, build and install Freetype to output/:

Wine configuration is a bit trickier, but if we set a few environment variables it should work just fine. First, let’s work around an optimization bug for certain versions of gcc when compiling Wine:

Now we’re going to need to tell the configuration scripts where we placed the Freetype library and headers. This can be done by exporting their respective directory paths:

Now run configure in the Wine directory like so:

The configuration should work just fine, however if you get any errors related to Freetype, you likely exported your Freetype2 build locations incorrectly. Assuming everything worked correctly, you can now build Wine for Android like so:

If there were no compilation errors, you can now proceed to copy the Freetype shared library you built over to the Wine Android driver assets.

Next, cd into the Wine Android driver directory to begin packaging:

There will already be an APK in this directory, but it’s missing the necessary assets, so clean up.

If everything works correctly, you should have a file wine-debug.apk that’s ~50MB in size! Copy it over to your device’s storage, or install it using adb.

One of the biggest issues I’ve noticed so far is that Wine refuses to load the desktop shell on certain devices. This seems to be related to certain problems with some graphics hardware/drivers. Unfortunately there’s not a whole lot I can do about it at this point. I’m actively hacking the Wine codebase in order to try and fix this up. One notorious example of this is trying to load it on an Atom AVD using native graphics on desktop NVIDIA hardware. Disable native graphics to make it work. For phones and tablets that have trouble, you may have some luck toggling Force GPU Rendering in developer options.

Another issue surrounds the Task Bar and Window sizing. On some devices the Start menu is unusable and the only way to access programs is through the Wine console. I’m working in getting this issue fixed up as it seems to be okay in the automated builds. As for the window sizing issue, just launch winecfg.exe and set the display DPI to your liking.

While Wine supports input through the touchscreen and virtual keyboard, it doesn’t open up automatically when you select an input box. Once again, I’m working on getting this fixed. In the meantime, you can pair a bluetooth keyboard up to your device, or install Hacker's Keyboard and enable the persistent notification to open the keyboard when it’s pressed.

Finally, for those who compiled Wine for an ARM-based Android, in order to run WinRT applications, you will need to make sure you have the tpidrurw patch applied to your device’s kernel. There’s a tool that you can build to check this over at https://github.com/AndreRH/tpidrurw-test.

There’s already some automated builds for Wine on Android on the official download site. Check them out here if your device is supported: https://dl.winehq.org/wine-builds/android.

So, today I decided to check out the firmware of a wireless router using the amazing utility known as binwalk. Nothing too unusual and everything seemed to work quite smoothly: Then I went to cd...

Recently, I came across a very interesting telephone service called CaptionCall. For those of you who don’t know about this service, it’s essentially a government-funded telephone captioning ser...