Ramblings of a Josh 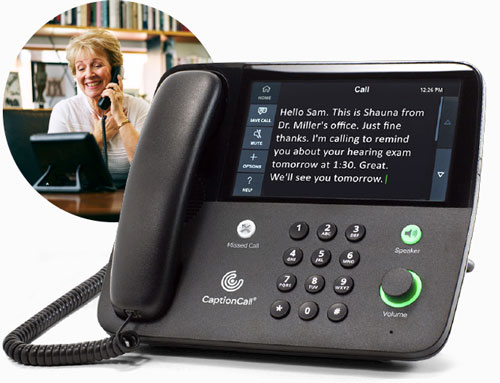 Recently, I came across a very interesting telephone service called CaptionCall. For those of you who don’t know about this service, it’s essentially a government-funded telephone captioning service that allows deaf or hard-of-hearing individuals to see a textual description of audio calls. But, more interesting than the service itself is the device they provide to their customers. It’s a fancy, Linux-based touchscreen landline running a proprietary UI atop a buildroot userspace. It’s also quite capable, sporting an ARMv7 i.MX6 Quad SoC, 4GB of NAND, and a whopping 1GB! of DDR3. Naturally when finding this out, I just had to get DOOM running on it. Unfortunately for us, however, CaptionCall has no developer documentation for their device nor a way to access a shell on the machine by default. Additionally, they provide no source code to their modified kernel tree. I have sent a few emails to them after completing this for-fun project regarding GPL violations, but I have yet to hear back nor do I expect that I ever will. Because of these hindrances, I had to get a teensy bit creative in my process. This post should cover most of my pains throughout my attempt, as well as offer guidance for anyone looking to hack their own CaptionCall device (Note: you can find tons of these things on eBay for about $25 each!)

Looking for an Entrance

So far, all I knew is that based on the firmware build ID this thing I had in my hands ran Linux. That’s really all I could find looking at the surface. Additionally, after hooking it up to my network and running a port scan against the device, nothing was open. Drat! Time to switch to plan b and open ‘er up! Removing the case was fairly trivial: 3 philips-head screws were the only things securing the back in place; 2 on the bottom left and right, and one more hidden below an adhesive rubber strip. After prying the two halves apart, two headers on the PCB immediately caught my attention. The first looks like a standard ARM JTAG pad; however the leads from the traces to the SoC were cut. Kind of a bummer. Not unfixable, but I really didn’t feel like soldering tiny jumper wires and inevitably burning off my fingertips. The second header definitely appeared familiar too. I guessed it was for UART access, and after probing it with a multimeter my assumption turned out to be correct! 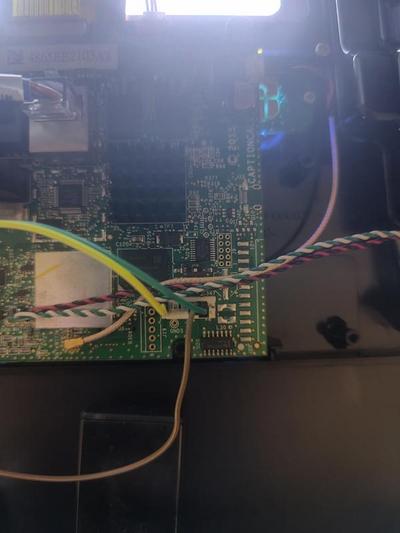 So, what can I do with UART on a CaptionCall, you ask? Apparently access the system console! However, there was one tiny catch. After completing booting, I was greeted with a friendly login prompt:

I tried root/root, root/toor, etc. but none of them worked. I was stuck until I could dump /etc/passwd and crack the hashed login password. But to do that, I’d need to access the ramdisk! And to access the ramdisk, I need a shell! I was stuck in a catch-22 situation. All hope was not lost, however, because pressing ‘Escape’ within 1 second of turning it on dropped me to a u-boot console! Still, the hardest part was yet to come…

U-boot comes with a few helpful utilities to make our life easier. This build let me play around with the loader environment variables like the kernel cmdline. Initially I tried to change it to boot single-user and with a custom ramdisk, but alas the kernel they built had built-in boot arguments and ignored those from u-boot. After a bit more digging I discovered this lovely article on how to recover firmware through u-boot over serial (since mine lacked the tftp command).

Basically, what I did was load the first kernel partition (since for some reason this has an A/B layout) to a known memory offset, and loop through each address value using md.b to print it over serial. This has the upside of being relatively simple to run, but the downsides of (a) being error-prone due to physical interference on the UART, and (b) being very, very, VERY slow. It took about 3 hours to dump the entire kernel partition over 115200 baud. And to make matters even worse, sections of the dump were corrupted due to the issue from (a)! That meant I had to make additional dumps over serial and merge them together in order to correct them! The whole process took about 9 hours, so I wrote a script called uboot_hexdump_parser.py to do all the dirty work + error correction for me while I slept.

After waking up the following morning I was greeted with my 32MB, error-free kernel partition dump! Running binwalk told me that I had a compressed Linux kernel neatly tacked onto a u-boot uImage header. Usually, you add the kernel and ramdisk separately to the uImage to make life easier, but CaptionCall decided to go the painful route and embed the ramdisk directly within the kernel. This caused a lot of suffering down the line, but I’ll cover that later. Binwalk had no issue stripping the xz-compressed ramdisk from the kernel and extracting it for me, huzzah! Poking around the files in /etc I learned the partition layout:

Everything is run from the ramdisk and most of that 4GB EMMC I was talking about is mounted to /mnt/data and contains user-stored contact info, help documents, images, recordings, etc. rather than a rootfs like I initially assumed. This meant if I wanted to change anything or stop the phone UI from loading on boot, I’d have to change the ramdisk. Nonetheless, I had gotten this far and I wanted to know what the default root password was. Running john took about 8 seconds to tell me the original unhashed root password was y4u8it. I tried that and was greeted with a busybox shell. So, I told myself, I’m definitely one step closer to getting DOOM working. :)

CaptionCall’s proprietary UI started on boot and hogged the framebuffer, so I quickly realized it had to go. The problem was that it was added in /etc/inittab to automatically restart when killed. And since the ramdisk was read-only I couldn’t just comment it out from my root shell. Plus, even if I did manage to remount / as read-write, it wouldn’t persist past a reboot! I had to figure out how to change the ramdisk at-will.

This took me on an exciting adventure in learning how kernel decompression works under the hood. You see, there are two general types of kernel images: “uncompressed” images (often named Image or vmlinux) which are your standard, run-of-the-mill kernels, and “compressed” images (often named *zImage or vmlinuz). For the compressed images, decompressor code (called piggy) is added at the beginning of the file, and the rest of the kernel data is compressed using gzip, bzip2, xz, etc. It looks a bit like this:

As it also turns out, you can just remove the decompressor code, extract the kernel data following it, and it will work just fine as if it was still compressed! That’s one less layer of encapsulation to worry about. Modying the ramdisk inside the kernel image is a bit trickier. Linux provides two ELF symbols, __irf_start and __irf_end to mark the beginning and end of the embedded ramdisk, respectively. However, my kernel image wasn’t in ELF format. Fortune favored me again, and I found a neat utility called vmlinux-to-elf that converts all manner of mutilated kernel blobs to ELF format. With this I was able to grep the ramdisk boundary offsets and begin patching! In the end, I wrote a second script called uImage_rdpatch.sh that deals with everything from modifying the ramdisk to even patching the touchscreen driver (which, as I found through way too much trial-and-error, had an evdev bug that prevented it from working under X).

My new ramdisk cleans up the inittab and also automatically runs any script called /mnt/data/init.sh on boot! Perfect for my next evil plan, which was creating a Debian chroot to auto-start X11, IceWM, and DOOM…

Since I really didn’t want to hassle with cross-compiling DOOM for an embedded buildroot ramdisk running an ancient version of libc, I opted to use debootstrap and create an armel jessie chroot, which, unfortunately, is the last version of ARM Debian to support glibc 2.23 and the CaptionCall Linux 3.0.35 kernel version. Luckily, this part went without much hassle (other than debugging the extremely strange touchscreen issues I ended up having to patch in the kernel, hmph)! Using my l33t Xorg.conf trial-and-error skills, I eventually wrangled fbdev, mesa, and evdev to load IceWM on the screen with touchscreen and keypad support. A bit more hacking and audio, bluetooth, and finally GPIO support was complete within my chroot.

Then finally, the moment of truth…

If you’d like to perform this hack yourself, I provide a pre-patched kernel, as well as all of the utilities listed in this post over at my GitHub repository here. All that’s required is for you to open the phone and connect a UART dongle to the plastic header, login using root:y4u8it, and finally write the patched kernel to NAND by typing dd if=kernel1.patched of=/dev/mmcblk0p3. Have fun and happy hacking!